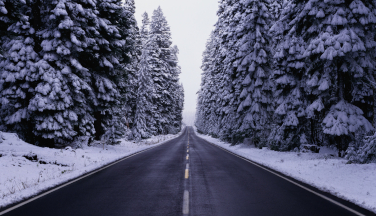 “Are synthetic oils better than conventional oils?” We hear this question all the time, and we don’t have a yes-or-no answer. It depends on so many factors, including the mix of equipment in your fleet and your operating conditions. What we can say is this: in order to meet more stringent EPA emission and fuel economy standards, modern heavy duty diesel engine design is driving a trend toward lower viscosity oils, which increasingly means full synthetics. And in the midst of a rugged winter with freezing temperatures from coast to coast, we would also add that the cold-weather characteristics of synthetic oils deserve serious consideration for fleets operating in colder climates.

The second area where synthetic oils shine is in low-temperature performance. In general, as an oil gets colder, it tends to get thicker. Synthetic base oils have a very good viscosity index, which means that their viscosity isn’t significantly impacted by wide temperature swings. Synthetics are actually pivotal in the formulation of winter grade engine oils such as 5W-30s and 5W-40s because they perform very well under extremely cold conditions.

Passenger cars started to transition to synthetics as far back as the 1970s, when the Corporate Average Fuel Economy, or CAFÉ, standards became more stringent. Over the past decade we have seen the exact same thing happening to heavy duty diesel engines. At one time, engine builders primarily recommended 15W-40 oils for protection against wear. Today, however, virtually every heavy-duty engine built in North America is factory filled with either a 10W-30 or 5W-30 oil. In fact, some are even factory filled with API FA-4 oils, the latest new category introduced in 2016, which have an even lower viscosity profile.

A 10W-30 oil will provide fairly robust all-season protection, but in colder regions, a 5W-30 or 5W-40 is likely the better option, just to provide an extra measure of robustness against low-temperature conditions.

Engine builders have made significant hardware improvements in recent years that have enabled compatibility with thinner fluids, including better materials, improved oil pumps, and electronic controls. Oil producers, meanwhile, have made comparable improvements to the oils themselves to ensure that oil flow and pressure meet the demands of these engines.

One of the biggest advantages to moving to a lower viscosity oil, which likely means a full synthetic, is fuel economy. One way to improve vehicle efficiency is to reduce what we call “parasitic” losses. A chief contributor to efficiency loss is the drag induced by the motor oil – the engine has to work harder, and therefore burn more fuel, to overcome the thickness of the fluid. So the math is pretty simple – when you’ve got a thinner, less viscous fluid, you’re going to waste less fuel. Results may vary, of course, but improvements of 1% to 2% are easily achievable just by changing to a lower viscosity oil. That may not sound like much, but when you consider that fuel is a fleet’s biggest operating expense, those savings compound and more than offset the initial cost of a synthetic versus a conventional oil.

All that said, focusing on whether an oil is synthetic or conventional is missing the point.  Just because an oil is synthetic doesn’t mean it’s better by definition. There are many dimensions to performance, so you need to be smart about selecting an oil that meets the specific demands of your hardware and your operating climate. That means looking at several factors, such as the API service category, the viscosity grade, and most importantly, the OEM specifications. It’s a good time to engage with your lubricant marketer who can give you the lay of the land. You might be surprised about the options available to you and the benefits you stand to gain from the lower viscosity trend.

Hear Shawn discuss the advantages of synthetics and other lubrication issues for truck owner-operators in a recent interview on LandlineNow.com.

Shawn’s career spans 25 years focused exclusively on research and engineering dealing with heavy-duty engine lubricants, fuels, emissions, and materials. Before joining Chevron in 2013, he spent 12 years leading global fluids and materials engineering activities for Cummins. He also spent five years conducting lubricant, fuel, and emission research for the Department of Energy’s National Renewable Energy Laboratory in Golden, CO. At Chevron, he is a Senior Staff Engineer primarily responsible for product formulation of the Delo Brand of Heavy Duty Engine Oils. Whitacre is the chairman of the ASTM Heavy-Duty Engine Oil Classification Panel, which was tasked with the final development of the API CK-4 and FA-4 specifications that took effect in late 2016.